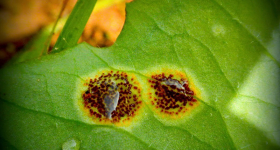 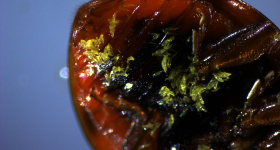 The world around you is teeming with life you can’t see. Plants, soil, water, insects — even your hair and skin — are home to microfungi, and they both sustain and devastate life on our planet. Parasitic microfungi, which live off of host plants and animals, maintain balance in natural ecosystems, but in developed areas can quickly destroy crops and financially devastate communities.

A team led by Purdue University mycologist M. Catherine Aime will venture to sites across the globe – including the tropics, where the vast majority of emerging crop diseases originate – to discover and identify thousands of species of parasitic microfungi. The team will focus on two parasitic microfungi groups: Pucciniales, which causes rust disease in plants, and Laboulbeniales, which parasitize arthropods. The project is supported by $1.5 million from the National Science Foundation, and also seeks to help resolve the “Tree of Life” for these groups.

“Microfungi are among the least understood living organisms on the planet, and they can be rule breakers,” said Aime, a professor in the Department of Botany and Plant Pathology. “Rusts don’t follow the typical patterns of evolution. Where we expect to see the genomes of parasites become compacted over time, theirs have expanded and we don’t know why. This study could lead to a fundamental change in the way we understand genome architecture. The implications could extend even to organisms beyond fungi.”
Aime is collaborating with Carl Dick, an associate professor of biology at Western Kentucky University; Danny Haelewaters, a postdoctoral fellow at Ghent University; Alisha Quandt, assistant professor of ecology and evolutionary biology at the University of Colorado Boulder; and Kyryll Savchenko, assistant professor of biological sciences at Butler University. Other collaborators include: Meredith Blackwell professor emeritus of biology at Louisiana State University, Don Pfister, professor emeritus of organismic and evolutionary biology at Harvard University and Giuliana Furci, CEO of the Fungi Foundation in Chile.

Haelewaters is an expert in Laboulbeniales taxonomy and systematics. “While over 2,000 species have been described, we expect many more, up to tens of thousands more. We find undescribed species of Laboulbeniales everywhere we go – in the tropics of course but also in well-sampled areas such as the USA, Belgium, and the Netherlands,” he said.
Parasitic microfungi will be sampled in North Carolina, Panama, Guyana, Patagonia, the Czech Republic, Armenia, Mozambique, and Brunei. The team will also involve the public by organizing community bat nights, in order to collect bat flies from captured bats, and working with citizen scientists in the jungle to describe new species.

Aime and Haelewaters are pioneers in the identification of parasitic microfungi that cannot be put into culture. They will use DNA-sequencing techniques to perform identification previously impossible. “Many microfungi viewed under a microscope are indistinguishable,” Aime said. “For instance, Pucciniales has five different spore stages, each of which looks different within a species, but the same spores stages can look the same between species. DNA sequencing allows us to clearly see distinctions and properly identify separate species and stages of development. We chose two of the least studied - but very consequential - types of microfungi, and we will be providing the first genomic resources for most of the species within them.”
“Likewise, a single Laboulbeniales species may have different morphologies, depending on where on its host it is growing. There is also a growing belief that many of the previously described taxa with many hosts and large distributional areas are in fact complexes of multiple species with no or very few morphological differences. These issues make it impossible to identify based on morphology alone in Laboulbeniales,” according to Haelewaters.

The research will evaluate what geographic regions have the highest diversity of parasitic microfungi and will test the latitudinal gradient hypothesis established for plants and animals. “This hypothesis suggests diversity is negatively linked to increasing latitude,” Aime said. “However, some recent studies suggest the opposite to be true for fungi. We think this may be due to the patchiness of fungal distribution in the tropics, like a quilt where one square doesn’t tell the story of the full, colorful piece. Our standardized sampling in tropical and temperate areas will for the first time allow for a robust comparison.”

“There are more than six times as many species of fungi as plants, but there aren’t very many mycologists at universities,” she said. “It is a new field, relatively speaking, because until the 1970s fungi were classified under the plant kingdom. Now we know fungi is a kingdom itself, and the organisms actually have more in common with animals than plants. There is so much to learn, and we need to scale up mycological education and professional training.”

The project will include undergraduate and graduate level education, community engagement, and the organization of workshops and fieldwork programs. Another important aspect will be the creation of a platform to house and share a rapidly growing microfungi dataset. The team expects to create the most exhaustive documentation of microfungi in these two orders to date. This massive dataset will be a rich and growing resource that can inform fungal systematics, ecological and evolutionary research.
The flip side of disease prevention is the need to understand parasitic microfungi to sustain ecosystems. “In nature, these parasites are critical to ecosystem health,” Aime said. “They play an important role by encouraging diversity in their hosts. They prevent one species from taking over and maintain balance. If we want to preserve or restore habitats, we have to look at the whole system, including what we can’t see. These microbes are as important as the plants and animals.” 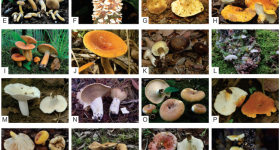 Fungi are a large and hyper-diverse group with major taxa present in every ecosystem on earth. However, compared to other eukaryotic organisms, their diversity is largely understudied. Since the rise of molecular techniques, new lineages are being discovered at an increasing rate, but many are not accurately characterised. Access to comprehensive and reliable taxonomic information of organisms is fundamental for research in different disciplines exploring a variety of questions.

A globally dominant ectomycorrhizal (ECM) fungal family in terrestrial ecosystems is the Russulaceae (Russulales, Basidiomycota) family. Amongst the mainly agaricoid Russulaceae genera, the ectomycorrhizal genus Lactifluus was historically least studied due to its largely tropical distribution in many underexplored areas and the apparent occurrence of several species complexes. Due to increased studies in the tropics, knowledge on Lactifluus grew. For several decades, the Russulaceae family has been the focus of our research group, and Eske has been studying the genus Lactifluus since 2010.

In this paper we demonstrate that Lactifluus is now one of the best-known ECM genera. The paper aims to provide a thorough overview of the current knowledge of Lactifluus, with information on diversity, distribution, ecology, phylogeny, taxonomy, morphology, and ethnomycological uses of species in this genus. This is a result of our larger study, aimed at building a comprehensive and complete dataset or taxonomic framework for Lactifluus, based on molecular, morphological, biogeographical, and taxonomical data as a tool and reference for other researchers.

Danny described a new species of Laboulbeniales from amber 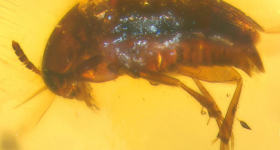 Fungal fossils are rare and so every find deserves a celebration. Only one fossil of Laboulbeniales is known in the literature, †Stigmatomyces succini on a fly embedded in Bitterfeld amber. Since 2012, Danny started working on another piece of Dominican amber, which contained a beetle with a thallus of Laboulbeniales. Both the beetle host and its parasite represented undescribed species and were described as †Proptomaphaginus alleni (Coleoptera, Leiodidae) and †Columnomyces electri (Laboulbeniales, Laboulbeniaceae). The fungus could only be accurately described by using a phase contrast synchrotron X ray microtomography approach, resulting in 3D reconstructions and even cellular dissections of organisms. 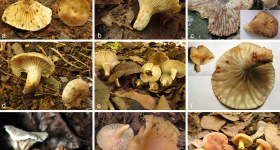 Species of the ectomycorrhizal genus Lactifluus, and often entire sections, are typically unique to a single continent. Given these biogeographic patterns, an interesting region to study their diversity is Central America and the Caribbean, since the region is closely connected to and often considered a part of the North American continent, but biogeographically belong to the Neotropical realm, and comprises several regions with different geologic histories. Based on a multi-gene phylogeny and morphological study, this study shows that Central America, Mexico and the Caribbean harbour at least 35 Lactifluus species, of which 33 were never reported outside of this region. It was found that species from the Caribbean generally show affinities to South American taxa, while species from the Central American mainland generally show affinities to Northern hemispheric taxa. We hypothesise that host specificity and/or climate play a crucial role in these different origins of diversity. Because of these different affinities, Caribbean islands harbour a completely different Lactifluus diversity than the Central American mainland. The majority of species occurring on the islands can be considered endemic to certain islands or island groups. In this paper, detailed morphological descriptions are given, with a focus on the unique diversity of the islands, and identification keys to all hitherto described Lactifluus species occurring in Central America and the Caribbean are provided. One new section, Lactifluus sect. Nebulosi, and three new species, Lactifluus guadeloupensis, Lactifluus lepus and Lactifluus marmoratus are described.

Looks can be deceiving: Lynn explored the group around the deceptive milkcaps. 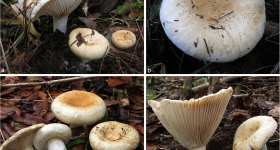 The ectomycorrhizal genus Lactifluus is known to contain many species complexes, consisting of morphologically very similar species, which can be considered cryptic or pseudocryptic. In this paper, a thorough molecular study is performed of the clade around Lactifluus deceptivus (originally described by Peck from North America) or the deceptive milkcaps. Even though most collections were identified as L. deceptivus, the clade is shown to contain at least 15 species, distributed across Asia and America, indicating that the L. deceptivus clade represents a species complex. These species are morphologically very similar and are characterized by a tomentose pileus with thinwalled hyphae and a velvety stipe with thick-walled hyphae. An ITS1 sequence was obtained through Illumina sequencing for the lectotype of L. deceptivus, dating from 1885, revealing which clade represents the true L. deceptivus. In addition, it is shown that three other described species also belong to the L. deceptivus clade: L. arcuatus, L. caeruleitinctus and L. mordax, and molecularly confirmed that L. tomentoso-marginatus represents a synonym of L. deceptivus. Furthermore, two new Neotropical species are described: Lactifluus hallingii and L. domingensis. 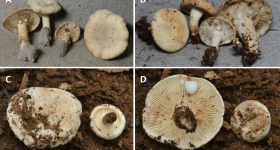 Lactifluus russulisporus and Lactifluus caliendrifer are described from eucalypt forests in Queensland, Australia and different forest types in Thailand, respectively. Both species have recently been published on Index Fungorum and fit morphologically and molecularly in L. sect. Luteoli, a section within L. subg. Gymnocarpi that encompasses species with alboochraceous basidiomes, white latex that stains brown and typical capitate elements in the pileipellis and/or marginal cells. 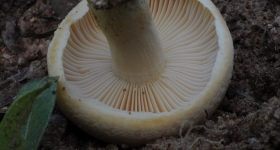 During the rain season of 2019, Eske and master student Marie went collecting in Zambia. Check out some pictures of this trip. 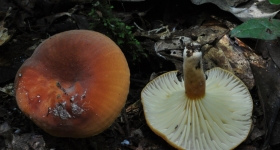 The milkcap genus Lactifluus is one of the most common ectomycorrhizal genera within Central African rainforests. During a field trip to the Dja Biosphere Reserve in Cameroon, we found a new Lactifluus species. Molecular and morphological analyses indicate that the species belongs to Lactifluus section Xerampelini and we formally describe it here as Lactifluus bicapillus sp. nov. 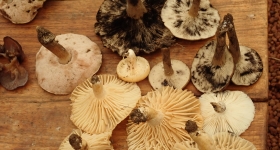 During the rain season of 2018, Mieke went collecting in Guinea.
Check out some pictures of this trip on the Workshops&expeditions page. 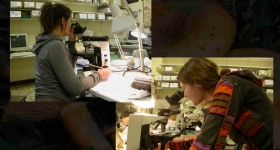 Find out more about the available topics for bachelor's and master's dissertations at our research group.

State of the World's Fungi Symposium 2018 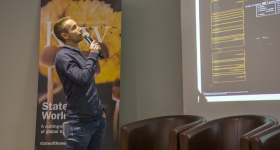 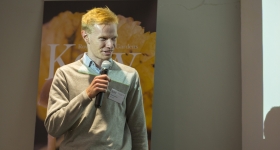 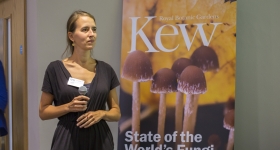 On September 13th and 14th, Ruben, Lynn, Eske and Nathan attended the first State of the World's Fungi Symposium at Kew Gardens. All four of them presented a poster on this interesting meeting. 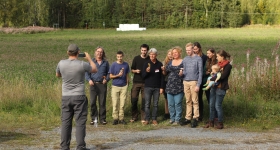 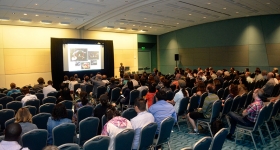 From 16 - 21 July, Lynn and Eske attended the 11th International Mycological Congress in Puerto Rico. Eske gave two lectures: "African ectomycorrhizal communities, diversity of three vegetation types compared focusing on Russulaceae" and "Out of Africa: the evolutionary history of the milkcap genus Lactifluus (Russulaceae) explored". Lynn presented a poster: "Filling the gaps: Completing the Lactifluus phylogeny by assessment of its Neotropical biodiversity and building a bRIDge between taxonomists and environmental ecologists".